The purpose of this therapy, on top of eradicating the infection, is to restore part of the supporting bone tissue which was lost due to such infection, and hence lengthen the life of the tooth in the long-term.

It is a complicated technique whose success depends to a great extent on the surgeon’s expertise and skills. Dr. David González has broad experience in the field at national level.

How can I recover my lost teeth thanks to Periodontics?

Regarding missing teeth, nowadays the definitive solution is dental implants. However, it should not be forgotten that, as long as it is viable, the best choice is preserving the own patient’s teeth. With an appropriate periodontal treatment, teeth which are apparently lost can be preserved.

Implants are an excellent choice in order to restore the missing teeth, but if the patients do not learn to eradicate the pathogenic bacteria and take care of their mouth, they will not be exempt from peri-implantitis risk.

How is periodontitis diagnosed?

The final diagnosis is based on the medical history, the x-ray study and the teeth and gum examination. An exploration is vital in order to check whether bone tissue surrounding every tooth has been lost.

These measures are recorded in a periodontal chart which helps us to draw a “map” of the bone and supporting tissue of each tooth.

What causes periodontitis or pyorrhea?

This illness is caused by bacteria living in the mouth, around the teeth. If they are not eliminated, they invade the groove between the gum and the teeth (the gingival sulcus), and their reproduction leads to swelling and tissue destruction.

Bacteria on their own are not capable of causing these illnesses. They need a vulnerable individual (genetic predisposition). Also tobacco, stress, old age, malnutrition or excessive alcohol consumption are major risk factors which lead to bacteria colonization. The genetic factor is very important.

Some individuals are more likely to accumulate plaque (dirt), but their supporting tissues withstand this attack. Nevertheless, in other individuals the disease progresses quickly and aggressively. That is why it is extremely important to know if there is prior family history of this type of diseases.

What are the symptoms of periodontitis?

Neither gingivitis nor periodontitis (in their first stages) hurt, and that is why sometimes their progress goes unnoticed. The clearest symptom of gingivitis is spontaneous bleeding or when brushing your teeth. Smokers might not notice this due to the tobacco’s vasoconstrictor effects.

They usually have red or swollen gums, feeling of bad taste in their mouths, or they report having bad breath and spontaneous gum bleeding during brushing or meals. Periodontitis might hurt but generally this is not the case, and that is why it usually goes unnoticed by the patients.

Also, smokers must take into account that they have decreased blood flow and therefore their gums bleed less. This contributes to the disguising of the periodontitis.

Periodontics treats periodontal diseases, which are inflammatory conditions of infectious origin affecting the tissue surrounding and holding the teeth.

Gingivitis, one of the most common oral diseases, occurs when the inflammatory process only affects the surface of the gum. Generally, it is not painful and is characterized by reddening, swelling and bleeding of the gums, either during brushing or spontaneously. If not treated, gingivitis can lead to periodontitis.

Periodontitis, commonly known as “pyorrhea”, occurs when the inflammation affects in depth the tissues surrounding and holding the teeth, giving rise to their progressive destruction (bone tissue is lost). Periodontitis appears mostly in adults aged 30 and over.

If not treated, the bone destruction brought about by the periodontitis might cause the teeth to move and separate. Over time, the teeth might well be lost, either because of the need of extraction due to their instability, or because they fall practically by themselves. Dr. David González is specialized in Periodontics.

What is the prognosis for the teeth?

Teeth will survive for a longer or a shorter time depending on the amount of supporting bone tissue that has been lost, hence the importance of an early treatment.

Without a treatment, the bone surrounding the teeth is more and more damaged, and mobility increases. Over time, teeth might even be lost, either because of the need of extraction due to their instability, or because they fall practically by themselves.

Most patients experience a slow progress over the years, but for some others the progress might be very fast– they could lose their teeth in five years. Likewise, in the same mouth unaffected or scarcely affected teeth might coexist with teeth severely damaged by the disease.

The possibility of contagion to partners or relatives with whom the patients live is a very common concern among periodontal patients. The truth is that there are transmission routes for the bacteria causing the disease, although as mentioned before, without other factors, just by themselves they can not lead to periodontitis. There is therefore no cause for alarm.

A transmission of the bacteria does not mean that the individual will develop the disease, but there is an increased risk. Thus, it is advisable for them to attend a check-up in order to discard the presence of the pathology and to receive instructions about prevention.

Periodontitis (also commonly known as pyorrhea) is a type of periodontal disease, that is, a disease affecting the periodontium, the ensemble of tissues fixing the teeth to the bone. Periodontal diseases involve an inflammatory condition and have an infectious origin. When the condition is superficial, it triggers gum swelling or gingivitis, which is reversible. However, it must be treated or it can become a periodontitis. When bacteria attack the deepest periodontal tissues, a destruction of the ligament and alveolar bone holding the teeth occurs. We speak then of periodontitis or pyorrhea. This loss of periodontal supporting tissue (periodontal ligament and bone) is irreversible, hence the importance of an early treatment.

Often they go unnoticed because in most cases they are painless. The symptoms and warning signs are:

-Receding gums: teeth seem longer due to the gum displacement. This condition can give rise to an increase of dental sensitivity, especially to cold.

-Teeth mobility: when the bone loss is profound, the teeth are not able to resist the pressure exerted upon them by the tongue or just the contact with their opposites during the mouth’s closing. Besides, the inflammation of the periodontal ligament might cause changes in their inclination and position.

-Abscesses or gumboils in the gum.

When these symptoms occur the periodontitis is in an advanced stage, and even if it can be stopped through good periodontal treatment and maintenance, the lost bone and periodontum are not regained. That is why an early detection is vital. In order to prevent them, a proper oral hygiene and periodic cleaning conducted by a dentist or a periodontist (gum specialist) are needed. It is extremely important to consult with a specialist to find out whether there is prior family history, as predisposition is linked to genetic factors.

Other risk factors are: tobacco, stress, hormonal disruptions (menopause, pregnancy) and immunosuppression conditions. The rate is low for young people and teenagers, but it increases with age (10% between the ages of 30 and 40, 25% between 50 and 60).

Related systemic diseases: it might pose an increased risk to patients suffering from diabetes and heart diseases. There is a clear association between periodontitis or pyorrhea and a risk of myocardial infarction, as well as a risk for pregnant women of premature birth and low birth weight.

Tell us the day and time you would like to come. We will contact you as soon as possible. 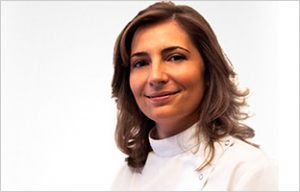